If you have ever eaten gummy candies and looked at them quite closely, perhaps you have had the chance to observe and really marvel at their detail. Have you ever looked closely at an intricate chocolate bunny and wondered how such detail was created? The contours of its ears, the texture of its fur and the delicate indentations of its whiskers. If not for their tempting aroma and materials, you would almost want to preserve these confections as art. But chances are, you cave to your craving and appreciate their tasteful lines in a more literal way.

Molded candies like these have been produced in a small batch creation process using starch forms since the late 1800s, especially in the case of marshmallow production in Europe, and mostly through the use of hand-crafted molds. The starch Mogul machine, which automated and evolved the actual process of mass candy manufacturing, came on the scene around 1920 or so. Hans Riegel, the founder of the German candy company Haribo, was the first to mass manufacture gummy bears in the 1940s, and he is generally regarded as the father of modern candy manufacturing.

Little has changed in the mass candy manufacturing process since this primary invention nearly 70 years ago. Mogul machines have, of course, become bigger and more automated, but the method itself is largely the same, including the detailed hand craftsmanship required to create the stamping dies. Until recently, that is.

Here’s a basic outline of the process: A design is carved into a shape (called a die) that is then glued to a wooden frame alongside other carved designs. These shapes are pressed into a tray of starch to make molds into which the candy material can be poured or injected before congealing or hardening. The starch pulls away easily, and the candies are either ready to go or can be coated with sugar or glazed. In its basic form, this process can easily be carried out in your own kitchen. The Mogul machine automates this process by lining the starch sheets on a conveyor belt and pressing the stamps into the starch 20 – 30 times a minute before they are filled with candy.

Deltavorm, a design company located in Scharendijke, in the southwest corner of the Netherlands, traces its candy die creation history back to 1948. Owner and CEO Nils Dogger says that from Deltavorm’s beginnings until about three years ago, all dies were handcrafted, usually in plaster. In previous attempts to automate the process, Dogger invested in a 3D scanner from 3-Shape, as well as SOLIDWORKS CAD design software. After scanning in the hand-sculpted designs, the data could be fed into a CAM software package for milling. This seemed like a good starting point for automation, but editing the scanned designs often proved to be time-consuming and frustrating to the point that the team almost preferred to go ahead and hand carve the new design to incorporate the customer’s changes rather than adapt the scan. In other words, no time was being saved, and Deltavorm still needed a better modeling tool.

The answer to this riddle was presented by Antonius Koster, owner of Antonius Köster GmbH in Germany. Koster’s demonstration of Geomagic Freeform from 3D Systems showcased the software’s combined toolsets for fast voxel-based clay modeling, alongside surface and tessellated modeling in 3D space with output to completed models for manufacturing. Deltavorm saw the possibilities for its business and invested in this process. Antonius Koster then assisted the company’s efforts by analyzing the existing manual workflows, adapting it into a fully digital process with output to CNC machining.

“The training was 100% customized to Deltavorm’s needs,” commented Koster. “This enabled the most rapid learning curve and adoption of the technology into the business.”

Geomagic Freeform delivers an entirely virtual clay modeling environment and toolset for designers, artists, engineers, and manufacturers. The software incorporates a haptic device for touch-based (force-feedback) design processes, which means that even though the 3D data is virtual, designers can still “touch” and “feel” the model almost as if it were real.

Geomagic Freeform works both as part of a larger design-to-production workflow and as a stand-alone tool for design-to-manufacturing. Its toolset can be used for output to 3D printing and manufacturing production, create molds for milling, detecting undercuts, etc. The ability to import and export neutral 3D file formats, as well as handle Parasolid formats, maximizes the ability to exchange CAD data. But even with all these toolsets, the biggest advantage of Geomagic Freeform is its ability to sculpt and model at the highest level of detail, in very intricate forms, and to repurpose designs down the line.

With all of these capabilities, the world of automation was suddenly open to the Deltavorm team.

“Geomagic Freeform introduced a profound change to our operation,” said Dogger. “Three years ago, 90% of the cuts we made were created by hand. Before then, initial designs could take weeks, and once we got a customer’s feedback, those changes tacked on additional time. Before we knew it, we’d have invested months with no final product to show for it.”

By incorporating Geomagic Freeform into their process, the designers of Deltavorm are now able to rapidly sculpt an accurate design, build the 3D model directly from a scanned hand-sketch, and maintain the option to incorporate other 3D scans as needed. Once the designs have been finalized, 3D PDFs can be emailed to clients for initial approval, along with a layout proposal for the production frames. From there the design data can go directly to the Roland MDX 540 milling machine to make the prototypes for shipment to the customer. At this point, the customer can conduct lab tests and come back with feedback.

“When you have such small, detailed designs, following a customer’s feedback to make them 5% smaller is very difficult to do by hand,” said Dogger. “Now with Geomagic Freeform, it’s an easy and precise process that takes little to no time.”

Once the designs are approved, a final set of cuts is made on the milling machines and glued to the wooden frame following the specifications in the production layout. These cuts can be from a range of materials, including plaster, detectable elastomers or even aluminum. The cuts are then shipped to the customer.

Speed of Design and Production

According to Dogger, it’s now “a matter of weeks” rather than months for the beginning-to-end completion of a project.

For the Deltavorm team, the new software allows them to get the design right earlier, which translates to the company now completing more than 1000 projects a year. Customer satisfaction is also higher since each customer is more involved in the process with a greater consulting role than ever before.

“The biggest benefits Geomagic Freeform has delivered to Deltavorm have been the notable increase in the quality of our designs and our ability to work much more closely with our customers,” said Dogger. “Now we can create more design variations to meet our customers’ needs and help them create their products more efficiently with better design-to-layout solutions.”

Dogger shared two recent projects that illustrate exactly what Geomagic Freeform brings to the Deltavorm team. In Dogger’s first example, Deltavorm replicated all of a customer’s existing products to help them dramatically increase their production volume. In his second example, Deltavorm redesigned a customer’s designs to stay true to the same manufacturing process but with better-looking end results.

“Our jobs have evolved from just executing someone else’s ideas to proposing ideas to the customer,” said Dogger. “We now have the flexibility to add value to our customers’ projects by offering the skills, tools, and knowledge to make each design better and more unique. “

In addition to himself, Dogger now has two full-time designers using Geomagic Freeform.

“The software has been easy to learn and even our newest designer took to it with only one day of training and a few introductory assignments,” said Dogger. “What’s more amazing is that the faster we work, the more work we get in the front door. Our growth is amazing!” 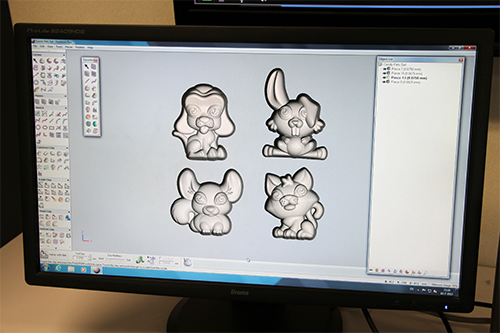 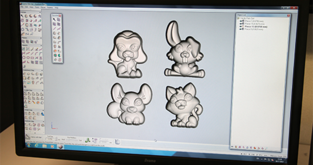 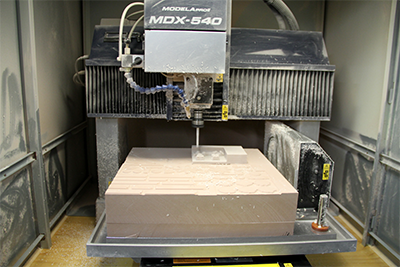 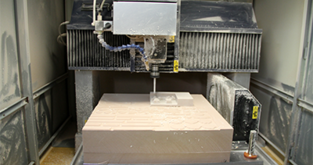 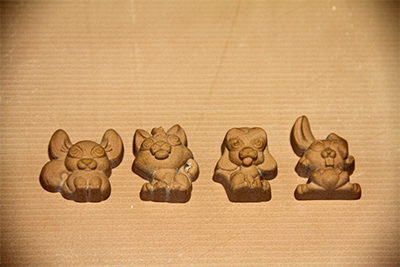 Machined shapes for the candy forms 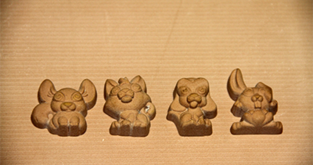 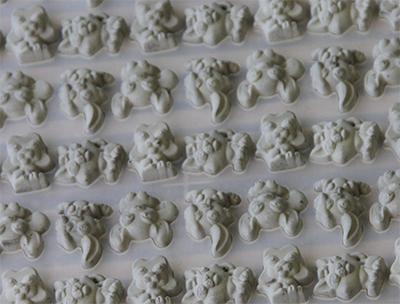 Tested candy shapes for the molds 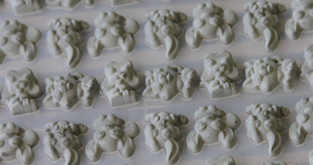 Get a Free Trial of Geomagic freeform