Imagine a submarine floating through the sky, and you'll essentially have an airship, otherwise known as a blimp. Beyond a physical likeness, the design and mechanical features of a blimp are in fact closer to a submarine than an airplane.

Such a melding of concepts introduces design elements unlike those in any other aircraft - something American Blimp Corporation realized first hand when the manufacturer of its custom fan blades went defunct. The company turned to engineering design firm Advanced Design Concepts (ADC) to create injection molds from the actual part. The new process improved quality, cut manufacturing time, and reduced costs by nearly 90 percent.

ADC offers rapid prototyping, reverse engineering, and first-run manufacturing services. The company uses Geomagic Wrap and Geomagic Control software to automatically convert point clouds from a scanned physical part into accurate digital models and to graphically compare those models to the part for quality inspection. The models are then used for downstream CAD/CAM, engineering analysis and machining. For American Blimp, ADC used the digital models to reconstruct the blade, create an injection mold for manufacturing, and inspect the mold for accuracy.

The mechanics of an airship make it nearly as intriguing as its peculiar form. Once inflated, the airship becomes "alive." An air bladder inside the envelope - called a ballonet - is pressurized by the blast from the engine propellers or by electric fans incorporated into the airbox. The pressure inside the ballonet acts on the helium inside the envelope to maintain the shape. The airbox has various valves that control and regulate the pressure semi-automatically, and manual controls allow the pilot to override the airbox if necessary.

As an airship rises, the helium expands and at some point the ballonet - which encompasses a very small percentage of the envelope volume - becomes empty. This condition is referred to as "pressure height." Pressure height limits the airship's maximum altitude, as helium must be vented for the airship to go higher. Helium valves can be used to release helium manually or automatically to spur a rise in altitude, but care must be taken to not release too much helium - which can cause the ballonet to conversely become too full at lower altitudes. When that happens, a replaceable panel in the ballonet is ripped out, allowing air into the helium chamber. The airship can then descend, but the contaminated helium will have to be replaced before flying again.

"Airships are strange beasts and are totally different from 'normal' aircraft," says Lance Nordby, project engineer at American Blimp. "They have a number of systems on board that has no counterpart in the airplane world."

One distinctive design aspect of American Blimp airships are the fan blades, modeled after the Moulton B. Taylor Aerocar of the 1950s. The car/airplane incorporated a cooling fan that American Blimp thought suitable for cooling the airship engines. This is particularly important because the relatively low airspeeds of airships make their engines difficult to cool.

For nearly a decade, American Blimp purchased the blades from Mouton B. Taylor's aircraft manufacturing business. Unfortunately, Taylor passed away in 1995, his business fizzled, and the supply of these blades eventually ran out. With no access to the original molds, American Blimp had a third-party vendor use a CNC machine to manufacture the blades out of acetyl from a scan of an original blade. Eventually, that source dried up as well.

"The vendor had ownership of the scan file," Nordby says. "Suddenly they went out of business with no notice and we had no way to buy the scan file if we had wanted to. We were up the proverbial creek."

The shape of the blade - now incorporated into all of the company's airship designs - had to be exact to provide the appropriate cooling characteristics and to fit on existing hardware. That made designing a new blade from scratch difficult or impossible.

Given the reduction of cost for short-run injection molding, American Blimp had already been contemplating having molds made for manufacturing the blades. ADC was a company that could do the whole job - scanning, mold-making and production.

American Blimp sent an original fan blade to ADC, which scanned it with a Perceptron laser scanner mounted on an 8-foot Romer arm. The blade was fixtured using one of its existing holes, so the scanner could see all of the part's surfaces.

"Perceptron allows you to orient the head in many different positions to capture every necessary angle," says Greg Groth, senior designer at ADC. The scanner can capture more than 23,000 points per second with 50-micron accuracy. "No 2D data had to be recorded because the high resolution of the scanner allowed us to capture everything we needed to reverse engineer the part." 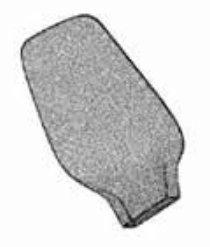 A Perceptron laser scanner scanned the original fan blade, and generated a point cloud with around 2.2 million points that was brought into Geomagic Wrap software 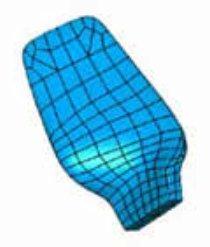 Geomagic Wrap was used to automatically generate a NURBS surface model, which could be imported into Pro/ENGINEER software 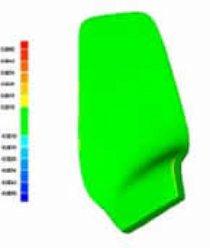 Geomagic Control was used to automatically align and compare measurement data from cross-sections of the physical part with the digital model, generating a color plot that showed final tolerances of +/- .005

Try It For Free