With the discovery of the world’s largest dinosaur occurring nine years ago and murmurings only now hitting mainstream media, it seems even news about paleontology travels at geologic speeds! Nevertheless, it’s always fun to hear news about dinosaurs, which always seem to capture our imagination.

Now, I may be a public-facing scanning enthusiast, but I am also an avid consumer of all things dinosaurian. That’s not why I’m writing this post, though. No, this post is to highlight one of the emerging trends in paleontology and archaeology that I find particularly interesting. That’s right: 3D scanning. The case of the new largest dinosaur (currently named Dreadnoughtus) is not the first time 3D scanning and preservation has been used on a dig, but it is a fairly well-publicized one. What’s more: the team involved in excavation and research has been more than happy to share the 3D images with the world.

Before we get into scanning details, here’s a little background. Dreadnoughtus was a sauropod (long-neck, for those of you that are less familiar) from a particularly large group of sauropods called titanosaurs (because they were so titanic). These were the largest animals to ever walk the earth (although not the largest to swim the seas – that title belongs to blue whales). The Dreadnoughtus currently trending in the news was a teenager found in Patagonia and weighed around 130,000 pounds (that’s more than half the weight of a Boeing 747).

Contrary to what you might see in natural history museums, it is almost impossible to find a complete dinosaur skeleton from a single individual. The bones you see in the museum are casts of the originals (real bones are too fragile and valuable) and made from pieces of many different individuals. So when paleontologists found 70% of the rear half of Dreadnoughtus (see picture), they were pretty psyched. With that quantity of physical remains, they could easily estimate physiological quantities like age and weight, as well as assert the potential size of a full-grown adult. Though the found specimen was an adolescent, titanosaurs could live well into their 60s, if not longer. Continuing to grow for much of their adult life (unlike humans, who mostly shrink), adult Dreadnoughtuses could very well match the weight of a Boeing 747, or potentially grow even larger. 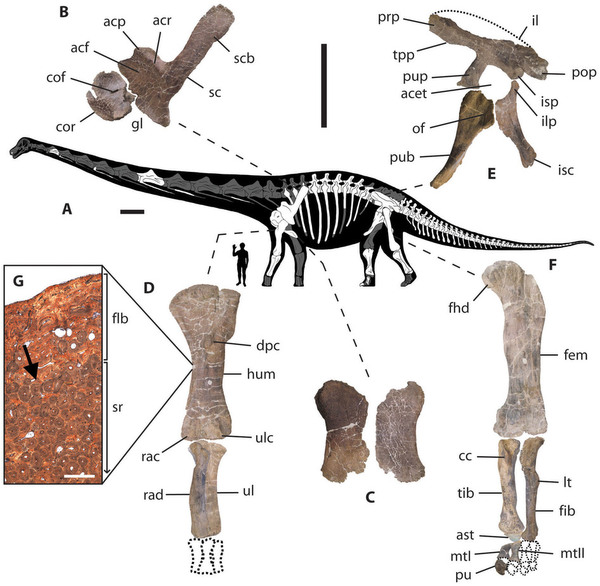 The pieces of Dreadnoughtus that were found, and where they fit together

Ok, paleontology lesson over. The long and short of it is that this is a BIG dinosaur. Returning to the earlier-mentioned concept that the bones in museums are casts, for a long time if you wanted to copy a dinosaur bone, you had to break out the plaster-of-Paris and get your hands dirty. No more. Now we have 3D scanning to help replicate these rare and valuable finds.

I haven’t looked at the available articles closely enough to find out which scanner was used, but I was able to determine which program was used to help put the pieces together. The scans were processed in software developed by my good friend Ping Fu from Geomagic (now Geomagic Solutions, a division of 3D Systems), specifically Geomagic Studio, a pretty powerful, professional tool for working with scans, STLs and a bunch of other 3D data.

What’s even cooler, the 3D images of all the bones are available for free download here. I say ‘3D images’ because the files are 3D PDFs, which are really neat if you’ve never seen one before, but not in a format you can 3D print (which I know so many of you love doing). There may be a place to get printable models and build your own dinosaur, but I haven’t found it yet. You’ll have to do some “digging” of your own.

It’s exciting to see we’re entering a new age of paleontology, where fossils can be shared with the click of a mouse and examined in hundreds of labs at once. As fun as 3D scanning people’s heads is, the technology has even more profound applications in research and history. It’s never been easier to get to the site of a dig, whether in person or virtually, and we have 3D scanning to thank, in part, for that. And hey, even the Sense has been used on an archaeological dig or two!

For more info on Dreadnoughtus, check out these links: