Issue No. 1 – How Long Does it Take?: 3D Printing’s Un-answerable Question 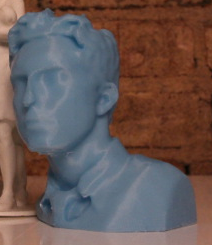 Hello dear readers, 3D printing enthusiasts, and happenstance stumblers onto this page. What you have found here is the first edition of an ongoing series that will look at 3D printing from more than just a technical perspective.  As is often the case, we have become so fascinated and enamored with this new technology that we frequently lose ourselves in the spec sheets and technical data. While these metrics are of course important to the functioning of the technology, they don’t tell the whole story. In fact, they often bypass the bigger picture of how 3D printing will impact society and daily life. Yes, we are beginning to hear more about how 3D printing is revolutionizing the medical, aerospace and automotive fields (they’re 3D printing a car, for crying out loud!), but we still don’t fully know how it will impact our immediate daily experience.

For a great many people, 3D printing is still something that happens out of reach. Tech companies and industry do it, but it’s not widely spread elsewhere, though I’m proud to say I have one in my home. For now I’m considered an early adapter, but I don’t think the time is too far off before more join me. For wider scale 3D printing to be a success, we need the right printing philosophy – a “printlosophy.”

That’s where this series comes in. As someone deeply immersed in the field of 3D printing and always willing to talk about it (and I mean always), I get to interact with a lot of people who look at 3D printing differently, but also those who share my views. For the small group that does own (or frequently uses) a printer: we speak the same language. We share a visceral understanding of the field that outsiders have difficulty grasping. I’ll do my best to make myself as understandable as possible for those that are new to this tech, and apologize in advance should anything get lost in translation.

Today’s topic is time. This may be the easiest aspect of 3D printing to trip over. If I were to list the top 5 questions I get asked about 3D printing, ‘How long does it take to print something?’ would definitely make the cut. Some people say there is no such thing as a bad question and I’m inclined to agree, but this question circumnavigates relevant knowledge about 3D printing.

For the scope of this discussion, let’s limit ourselves to Plastic Jet Printing (PJP, aka FDM and FFF) technology, since this is by far the most prevalent and accessible to the layman 3D printing world. For those of you unfamiliar with the technology, a spool of plastic, typically a few millimeters in diameter, is fed into a hot nozzle and deposited, layer-by-layer, onto a platform. By adjusting the Cartesian (X, Y and Z) coordinates of this nozzle, plastic can be deposited in some regions and kept out of others. This allows the construction of physical objects. People have figured out near-countless ways of doing this (if you don’t believe me, check out Kickstarter and Indiegogo) but the most basic concept is always the same: moving that nozzle around to build up material.

The 3D printer is only as fast as its nozzle, and that speed can be impacted by several factors. For starters, there’s size. It shouldn’t come as a surprise that a larger object takes longer to print than a smaller object. Furthermore, if the same object is printed at different sizes, the larger version will take longer. This makes sense. If you took a book report in 12 point font and scaled the letters to 72 point, you would take up many more pages and printing the report would take more time.

A second, less obvious factor is the positioning of objects on the 3D printer. The more the nozzle has to jump around, the longer the print takes. If I wanted to print out two blocks side-by-side, the printer would have to put down a layer of plastic for one block, then jump to the position of the other block and lay plastic there as well. This process would continue until both blocks were printed. Even this has a 2D printer equivalent (at least for people not using laser jet printers). For ink printers, the print head must move across the page to deposit little droplets of ink and form the words and images. If I only put content to print on the top half of the page, it will take less time to print that page out since the print head doesn’t have to move over the lower half of the page. Now, you may ask ‘Why would I leave half a page blank if I have more to say?’ to which I would fire back ‘Why would you leave half of a 3D printer platform empty when you could be printing models in that space as well?’ We sacrifice expedience in printing when we choose to maximize the workable real estate of the medium onto which we are printing. More work is being done, and this will take more time.

Perhaps the hardest factor to grasp is print pattern, or infill, especially since it’s not something you see on a finished print. Most of the objects we interact with are solid because that’s the way they are most naturally made. However, 3D printing is different.  Since it builds up objects layer-by-layer, it doesn’t have to make the inside solid. Oftentimes, the inside of a printed part resembles the internal structure of our bones: mostly hollow with a 3D honeycomb structure that allows for high strength but low weight. The exact size and shape of that honeycomb can be adjusted when 3D printing, typically between completely hollow and completely solid. These settings can dramatically alter the duration of a print. If an object is printed hollow, it will take the least amount of time, since the perimeter of a layer will be drawn and then nozzle can then immediately move up to the next layer, where the same thing will happen. A completely solid object will take the longest time because after each perimeter, the interior will need to be filled in and the nozzle will have to cover that entire area before it can move up to the next level. In between those two extremes are all the other print durations. Once again, this has a 2D analog. If you print a picture on fast draft mode, the printer will move faster and deposit less ink drops than if you printed that same picture in the finest quality.

Between an object’s size, positioning and internal structure, it’s a miracle we can gauge how long a 3D print will take at all. But the printer knows and many printers now even show your model ETA on a display screen. Don’t be surprised or upset, though, if you see that a 3 inch print will take 8 hours. If that’s the case, go back into the printer settings and check out how dense the internal structure is and how many times the nozzle will have to jump from one tower to another. From this you’ll probably be able to deduce where that time is coming from – and why you need it.

So what printlosophy should we take away from today’s discourse? The printer is doing a lot of work for you, so don’t preoccupy yourself with how long it takes. You probably wouldn’t be able to make what it’s making at any speed close to what the 3D printer can do by another means. So don’t ask ‘How long will it take?’, but ‘How well does it make?’