Every now and then, when you leave engineers alone to brainstorm, they come up with some amazing ideas. But what’s best about these people is that along with these amazing ideas, they usually have a pretty good concept of how it can be executed.

Just a few weeks before Euromold, this exact process became a reality. Derek Johnson, our Director of Product Management, was looking for ways to demonstrate the multi-material 3D printing available in the new ProJet 5500X system being announced at Euromold. Nick Chwalek, Senior Sales Manager at Geomagic Solutions, happened by and they started talking about Nick’s hobby of tinkering with remote-controlled (RC) vehicles.

Suddenly it all started to click together. Using Nick’s expertise at scanning and 3D design, and Derek’s and Ryan Schneider’s expertise at 3D printing, the idea of 3D printed multi-material tires and wheels for an RC truck, plus a custom-printed body, became real.

“We knew that a tire and wheel assembly would be an ideal test of the multi-materials ability of the new ProJet 5500X,” said Derek. “As I was talking to Nick about it, so his passion for remote controlled vehicles came to the fore. Could we do it in the few weeks we had left? We didn’t know but we for sure were going to try.”

Nick added, “We were looking at some amazing new 3D printing technologies that were about to be announced and we didn’t stop at just the wheels but figured that the vehicle could benefit from a custom-designed body. So we had a word with Ryan Schneider (product manager for ColorJet Printing) and decided to kick the project off. With the newly purchased RC truck in my hands, I dismantled certain parts and started scanning.”

Using the new Geomagic Capture scanner from Geomagic Solutions, Nick scanned the truck body, processed the data in Geomagic Studio and sent it to Ryan.

Next Nick turned to the wheels. Working on directions from Derek about material properties, he designed the wheels in Geomagic Design Direct using measurements from the original wheel and tire. 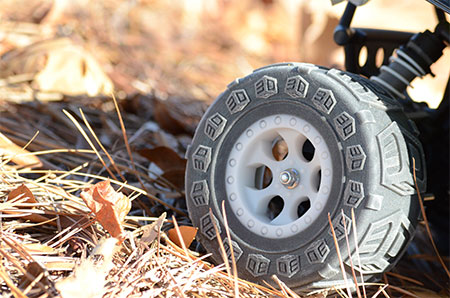 “As I designed, I created thicker tire walls than I would have originally, based on the material properties, and shallower detail. Working in Geomagic Design Direct I was able to add the 3D Systems logo in 3D, and I added scaled lug nuts and bead lock hardware to the assembly data. These style details were less than 0.06” in size and yet printed in perfect detail. The wheels look awesome.”

In the meantime, Ryan had created a full-color design on the body data and was ready to print. Because the new plastic 3D printer had already been shipped to Euromold, he printed out several truck bodies on the ProJet 660Pro full-color printer just a few days before the event and hand carried them to Germany.

Said Ryan, “It all came together when I opened the box at Euromold. The tires looked great and the body was easily put on with Velcro. It was really cool to see a functional part made out of multiple technologies and materials come together like we had imagined and talked about. Seeing the idea on the screen is one thing, but seeing the truck in real life and have it work as we imagined were the best parts of the whole project.”

Even though they achieved what was planned for Euromold, the team is now working on other custom changes to the RC truck: new struts, different body styles, perhaps. So at other 3D Systems events, keep your eyes peeled for the ever-evolving RC truck from the team at 3D Systems.

View the video of this RC Truck at Euromold 2013