When the Formula One circus went on holiday, at the beginning of August, our staff here at Sahara Force India knew that a big challenge was waiting for us upon our return.

Having produced our best ever start to a Formula One season, with 59 points from the first ten races, our design team was faced with the unusual situation of a mid-season change of rules. The Formula One tire suppliers, Pirelli, were to alter the build of their tires, something that is normally maintained throughout a season and that heavily affects the performance of a car.

Such a change can be costly for a team – in every sense. Resources have to be diverted to understand and adapt to the new materials, and the way the new rubber works with the car means a redesign of some key part is needed: these can be very expensive operations.

Thankfully, at Sahara Force India we have access to some of the best SLA Production Printers by 3D Systems – and they have been the key to the 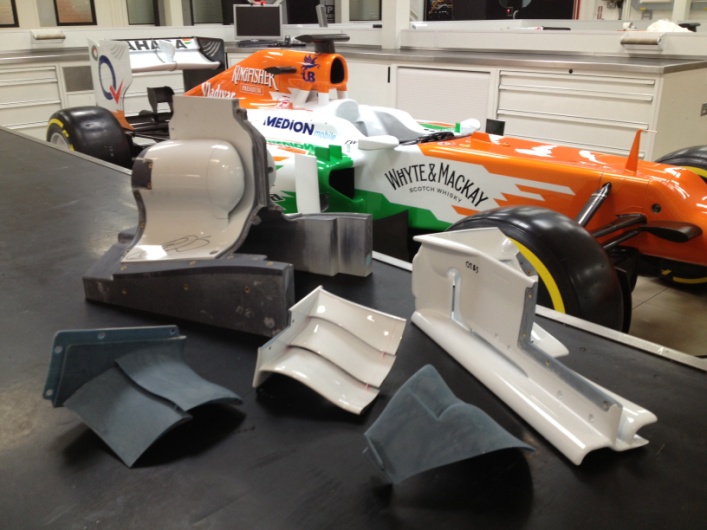 team facing this challenge in a cost- and time-effective way.

Before taking any piece to a race weekend for on-track evaluation – a very expensive operation in itself, and heavily restricted since the ban on testing – each upgrade needs to undergo a thorough analysis in our wind tunnel. Here, a 1:2 model of the car is fitted with all the new solutions and run through the tests, which simulate a high-speed environment, to produce oodles of data for our designers and analysts to go through.

It is a painstakingly accurate process, in which several iterations of one piece are tested to produce the ideal compromise between down force and good air flow. It’s a process which wouldn’t be possible without 3D Systems, whose printers allow us to create the required number of variations at a fraction of the cost and time that would be required to have the same in carbon fiber – the material making up most of our cars.

The special ceramic-filled resins used in our production printers have allowed our designers to test hundreds of new pieces to adapt our cars to the change of tires and to retain the advantage we have built in the first half of the season. They are versatile, cheaper than carbon fiber and allow us to produce hundreds of pieces in a day – as opposed to weeks.

Thanks to these upgrades, our drivers managed to restart the Championship after the summer break with a spring in their step, producing performances like the one that saw Adrian Sutil rewarded with two points on the most challenging track in the calendar, Spa-Francorchamps.

With work now directed towards our contender for the 2014 Championship, 3D Systems products will help us share the future of our team as Formula One enters the turbo era. Equipped with the best products in the market to help our design team, we are ready for this new challenge.